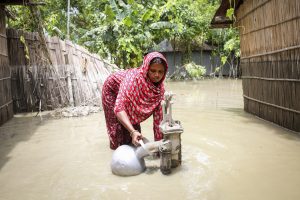 After the flood, I lost my house for the sixth time because the river eroded. I sold my cattle and everything I had in order to rebuild my shelter last year. This year there was another devastating flood which destroyed my house again, and now staying here is another nightmare. I have no idea how I will manage to pay back all my loans while spending nights in this smashed-up house with my children. We have been starving most of this last week. We have nowhere to go, no way to cook and most importantly nothing to cook. We live on the bank of the river in the northern part of our country. Now floods come two or three times a year and in addition, the extra water from India also comes when we don’t need it. We live in the flatlands so even in heavy rainfall this area becomes flooded. We can’t grow crops because this kind of sudden flood destroys everything throughout the year. Before the end of one year of trouble, the second year of floods begin to make us suffer again.

I never had any happy childhood moments. From the beginning of my life I have been facing extreme hunger and a washed-up future. At the age of six for the first time, I had to rebuild our destroyed home with my parents when the flood hit us. Then the river took our land. I grew up during those nights; when the river took every dream we had. I was never a child again.

Two of my younger brothers died after that incident from diarrhea. There was no treatment. We could not afford to go to hospital. I have seen many deaths and diseases. Some were silent, some were miserable and some were deadly. But nothing is worse than hunger. You can fight disease but you can’t fight hunger.

I am looking forward to joining my husband in Dhaka City. He tried for several years to make me understand that I had to leave this land and work together with him for a better future for our children. But I never listened to him as I never wanted to leave. But this time I have prepared myself to be strong. I love my land but it can’t meet the needs of my children’s hunger. My land can’t give me a respectful life. This land only can give me heartache every year with its cruelty.

I hope our endless sorrow will end one day. Hundreds of women are leaving here and going to Dhaka. I also want to get out of this open prison, this world of water, where I was born as soon as possible. I want to give my children a better life and I want them to be able to have a childhood. I don’t want them to rebuild their destroyed house again and again with a broken heart. I want them to carry their school bags every day with hearts full of hope.